ON THE BRINK OF AN ASSET EXPLOSION

I can virtually guarantee that what I’m about to suggest isn’t on anybody’s radar screen. But before I share my prediction, a little background analysis is in order.

There have been seven previous bull markets that were born in the depths of vicious bear markets similar to what we just went through. Each one of those bulls racked up impressive gains during the initial thrust out of the final low. Throwing out the `32 to `37 bull as an anomaly not likely to be repeated, the average gain for the first two legs of bulls with similar DNA as our own has been between 41% and 73%. After the second leg each one of these bulls underwent a mild corrective pullback of 8% to 14%.

I’ve been looking for that pullback since December and we obviously got it from mid January into early February.

Next I’m going to put up a long term chart of the S&P from the `02 bottom to present so we can make some comparisons for what should and should not happen in a “normal” bull market…if there is such a thing. Both bulls were born on the back of massive liquidity injections by the Fed. So it’s not surprising they have followed a similar path…well at least up to now.
Generally we will see the most aggressive moves at the beginning and the end of a bull market. At the beginning smart money piles into perceived value. At this stage of the game retail traders are still too shell shocked from the bear to trust the rally.
Finally towards the end of the bull, retail investors will panic into the market on fears of getting left behind sending the market surging higher. This is of course when smart money is unloading their shares.

You can see that the `02 -`07 cyclical bull followed this script almost to a T. The sharpest rallies occurred from March `03 to early `04 and then again as the market surged out of the `06 bottom into the final top in October of `07.
The cyclical bull we are in right now is about to morph into a completely different animal than just about any other bull market in history. And most certainly this bull will not fit in the same category as the `02-`07 bull. I think we are about to bypass the second phase of a normal bull market and jump straight to phase three, the ending stage.
This is a bull spawned by the printing of literally trillions and trillions of dollars by central banks around the world. You can see by examination of the chart above that this bull has been much more aggressive than the last one, rallying over 70% in its first 10 months.
The recent move to new highs by the Russell, Mid Caps, and Nasdaq suggests that the third leg of the bull is now underway. As most intermediate term rallies last 20-25 weeks trough to trough and this rally is on week 4, we probably have at least 10 to 15 weeks left before we can expect a top. 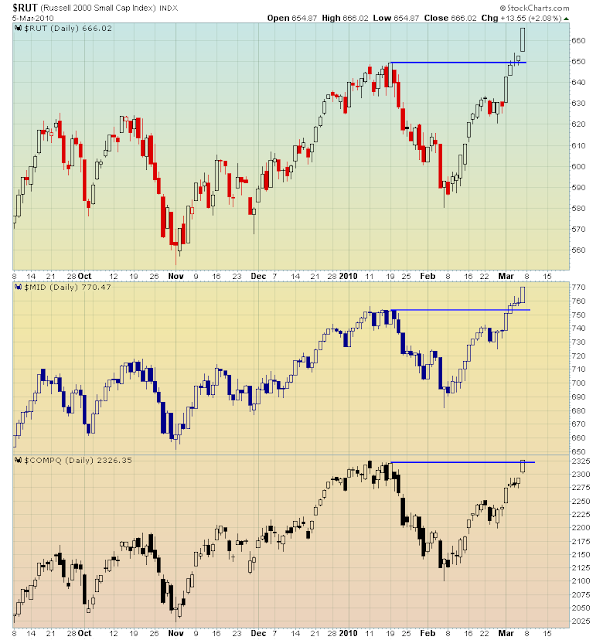 Now keep in mind that this has transpired while the dollar has been rising. As a matter of fact, the dollar is the key element in what I’m about to suggest.
So next, let’s take a look the dollar. 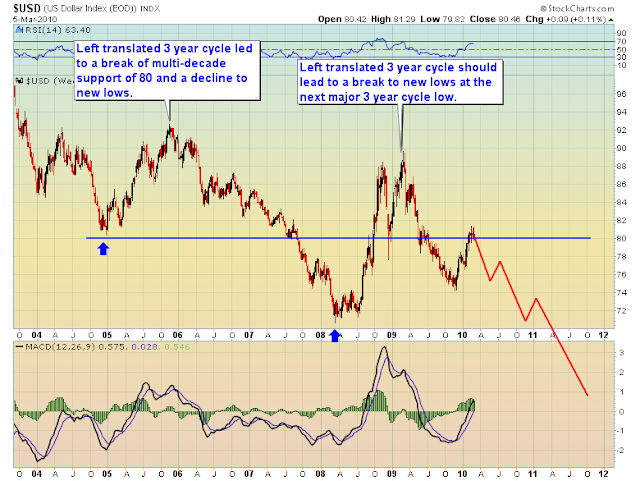 I’ve marked the last two major 3 year cycle lows with a blue arrow. Now to understand where I’m going with this you need to understand the concept of left and right translated cycles.
A left translated cycle is a cycle that tops left of center. For instance, if the rally out of a 3 year cycle low were to top out in less than 18 months we would consider it left translated. Generally speaking the majority of cycles that top in a left translated manner move below the prior cycle low.
You can see in the chart (above) that the 3 year cycle that began in December of 04 did in fact top in less than 18 months. As expected it broke to new lows at the next 3 year cycle low in `08.
We are currently in the same position in this 3 year cycle as it has obviously topped in a left translated manner. As such, we should expect to see the dollar break to new lows by the next major 3 year cycle low due sometime in 2011.
Now if we zoom in a bit I’ll tie this together with how it relates to what I think is brewing in all asset markets.
There’s no doubt the rally in the dollar over the last three months has been violent (the most violent rallies occur in bear markets). However, as you can see from the chart below, so far the dollar has not been able to move above the peak of the last intermediate cycle. 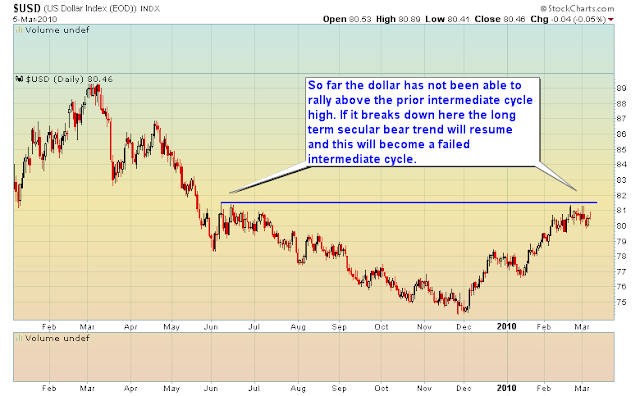 We now have a failed intermediate cycle in the making. If the dollar fails to break the June `09 highs and continues to roll over it is in jeopardy of succumbing to the secular bear trend again.
Next I’m going to note that last week was the 14th week of the dollar rally. The intermediate cycle in the dollar rarely lasts more than 20-25 weeks so not only is the dollar getting deep into an intermediate cycle and in jeopardy of topping at any time but it’s also contending with the multi-decade resistance level at 80.
Not only that, but sentiment has now turned to extreme bullishness for the dollar and extreme bearishness on the Euro. That is a recipe for running out of buyers of dollars and a prescription for a violent short covering rally in the Euro.
Now remember, the stock market has been rallying despite the dollar. Oil is over $80 despite a strong dollar. Copper is only about 15% from all time highs despite a strong dollar. Gold, the strongest commodity of all, is holding well above the prior bull market high of $1025 in defiance of a strong dollar.
All asset classes are now wound up as tight as a drum. If, or should I say when, the dollar begins the trip down into the next intermediate cycle low all assets are set to explode higher.
As hard as it is to believe I think there’s a very good possibility that the third leg of this cyclical bull could match the first leg and tack on 200-300 points in the next few months.
I think virtually everyone underestimates the effect that the multi-trillions of dollars the Fed has pumped into the system is going to have on all markets. 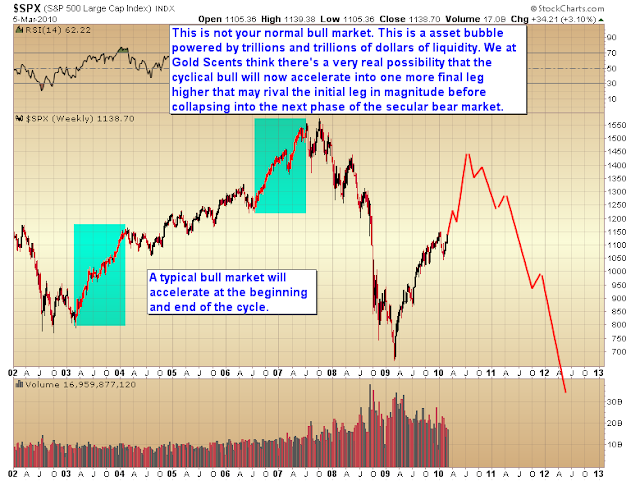 Unfortunately that’s probably the single worst thing that could happen for two reasons.
First, I’m afraid that not only will the stock market surge higher but so will the commodity markets in an inflationary explosion. It was $147 oil and $4.00+ gasoline that eventually broke the back of the global economy in `08 when it was already reeling from a bursting credit and real estate bubble.
Second, I’m afraid the average investor is going to fall for the hype that the Fed has “fixed” all of our problems. If the S&P is trading north of 1400 it’s going to appear that the coast is clear.
Nothing could be further from the truth, so when the market tops and rolls over into the next bear phase virtually no one will recognize what’s happening and everyone will again get sucked down into the depths of the bear.
Only this bear will be much worse than the last one.
This bear won’t be caused by problems in the credit markets. No, this bear is going to be driven by structural problems in the currency markets and soaring inflation. Unfortunately we aren’t going to fix a currency crisis by printing money. Money printing is going to be the cause of the crisis in the first place.
The only asset class that is going to offer any protection in this environment is commodities. And the one sector that will thrive in a currency crisis is the precious metals.
Not only will gold and silver outperform in the pending inflationary surge, but they will protect investors during the inevitable crisis that the Fed’s insane monetary policy is going to unleash next year.
Posted by Toby Connor at 8:02 PM