TOO CLOSE TO CALL

Is it a bear market, or is it a bull market, that is the question.


On one hand Europe is obviously in a recession. China is slowing dramatically, and the US economy is clearly in 'stall mode' at best, and slowing rapidly at worst. That alone would suggest that a bear market has begun.
On top of that, the S&P broke through its daily cycle trend line today (although it did manage to rally back before the close). 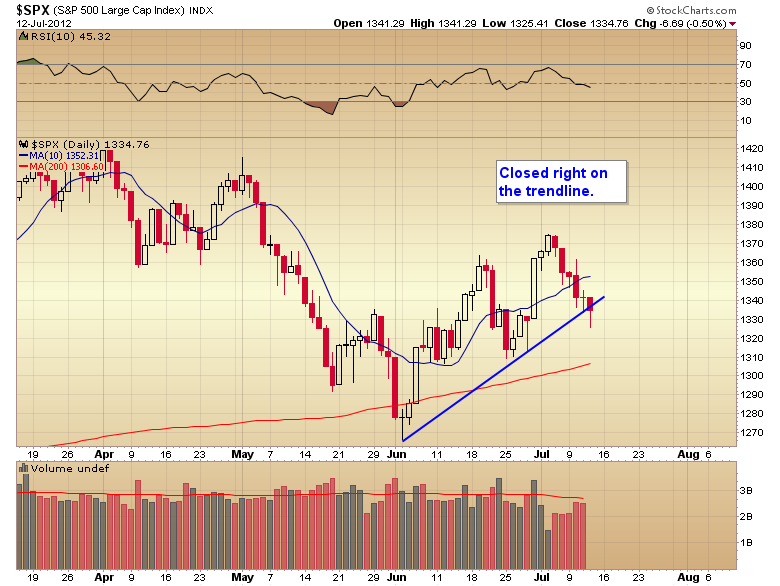 A break of the trend line usually indicates that the daily cycle has started its decline into a cycle low. If this turns out to be the case, then this cycle would have topped on day 21 which gives it quite a few days to move down into the cycle bottom. (Average daily cycle length trough to trough is about 35 to 40 days). If it does turn out that the cycle topped on the 21st day then there is a strong chance of testing the June lows at the next daily cycle bottom.

On the other hand, there are quite a few bullish signs that are popping up.

For starters, this is an election year. Does anyone really think that the politicians won't pull out all the stops to try and keep the economy and markets inflated up until the election?

Next, the advance-decline line managed to make a new high even though the S&P was still 3% below its 52-week high. As Jason Goephert at sentiment trader.com has pointed out, this has almost always lead to new highs. As a matter of fact, Jason noted that since 1940 there have been 13 similar occurrences and all but one led to the market making new highs within 3 months, on average within 18 days of the advance-decline line breakout. 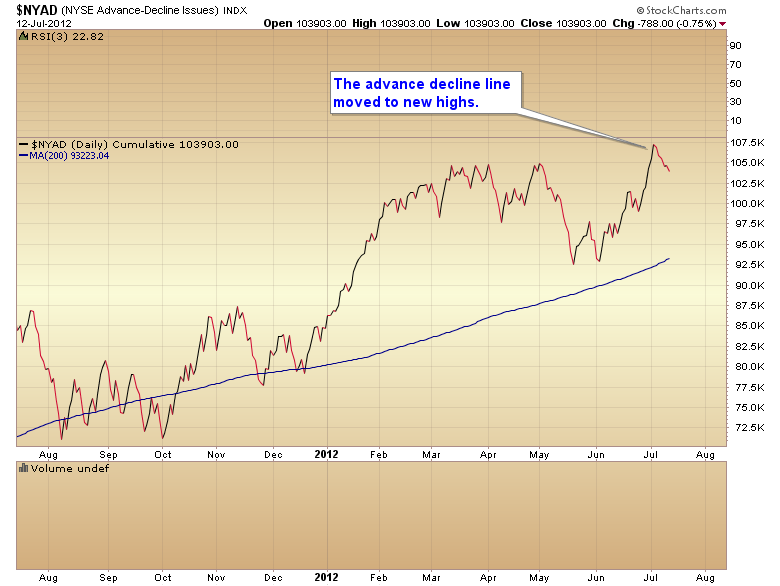 Another positive is that the CRB's rally out of its three year cycle low appears to be consolidating in a bull flag in preparation for another leg up. If stocks are caught in a bear market then the CRB should be rolling over rather quickly. 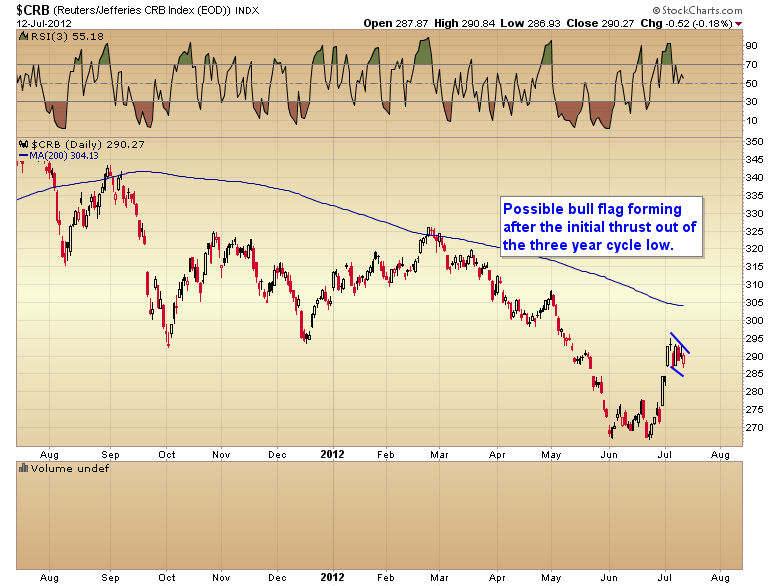 Oil is also resisting the short-term weakness in the stock market and appears to be consolidating the initial $10 thrust off its intermediate bottom, and preparing for another leg up. 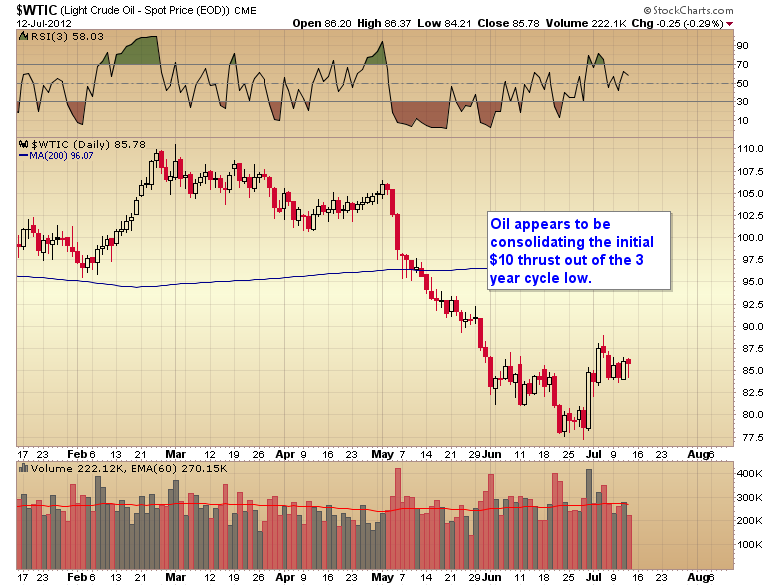 A different but related vein of thought is the US dollar index. Today was the 16th day of the dollar's daily cycle (average duration 18 to 28 days). This being the case, it's getting late enough in the cycle that the dollar should start to move down again any time now. A major concern for bears would be any move lower by the dollar as risk assets tend to trade inversely.

An even bigger concern is dollar sentiment. It is currently at levels that have generated intermediate tops almost without fail in the past.

A possible negative is the fact that gold seems unable to gain any upside traction in this new intermediate cycle. If the CRB has formed a three year cycle low why isn't gold generating any upside momentum?

Another negative is the fact that mining stocks as represented by the GDX ETF did move below their prior daily cycle bottom. The one small sign of hope is the reversal Thursday, which if it holds above the May lows could indicate that miners are just moving through a 1-2-3 reversal, and this was the #2 test of the lows. 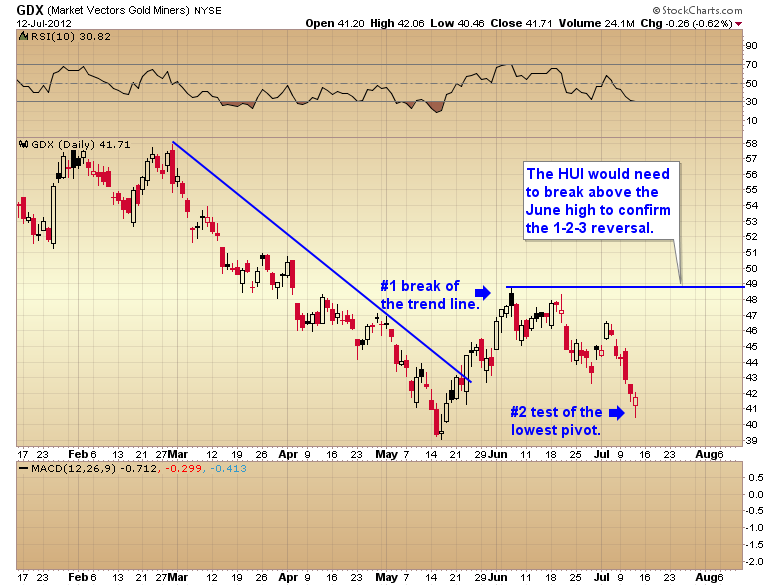 Of course we won't know whether this is in fact what is happening until miners either break below the May bottom or move back above the June high.


For the bulls the S&P needs to move above $1375, the CRB must generate another leg up, and gold must make a higher high by reclaiming the $1622 level. These are the bullish lines in the sand.

The bears they need to see the stock market drop below the half cycle low of $1310, the CRB must break downwards out of its consolidation, and gold has to drop below $1547.

I think the appropriate position for traders at the moment is to stay in cash until we see which one of these lines are going to be crossed first.