Stocks:Well we now know the stock market wasn’t preparing to roll over into the half cycle low, it was just consolidating for the next powerful push higher and powerful it was. Another 90% up volume day. And it’s done this without the dollar falling significantly. As soon as the dollar decides to break and roll over into the intermediate cycle low it should act as a big tailwind to a market that already wants to go higher.

This is setting up to be almost as powerful of a thrust as the one out of the July intermediate cycle low. 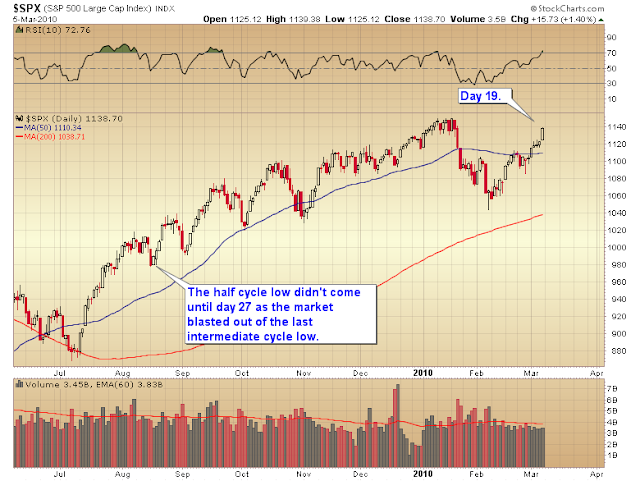 A sharp break in the dollar over the next couple of months and we could still be on track for that very powerful third leg that I hypothesized a while back. Depending on whether we get two or three daily cycles nested within this intermediate cycle we can probably expect the market to continue rallying strong until inflation destroys the economy again. 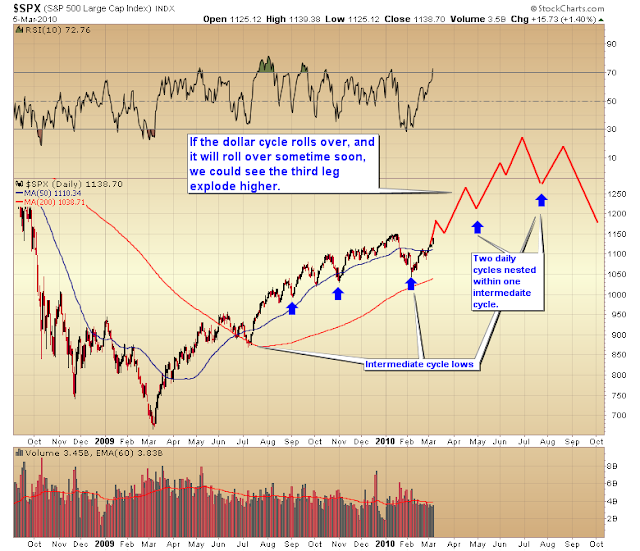 It’s been pretty dangerous on the short side ever since February 5th unless one is an exceptional day trader. As soon as we get a weekly swing high on the dollar all markets will be in jeopardy of entering runaway moves higher. As long as the commodity markets are also surging (and I think they will) then I still think this third leg will probably serve to cap this cyclical bull.
For now I will just keep an eye on the money flow data as a clue for when to expect the dip into the mid cycle low. 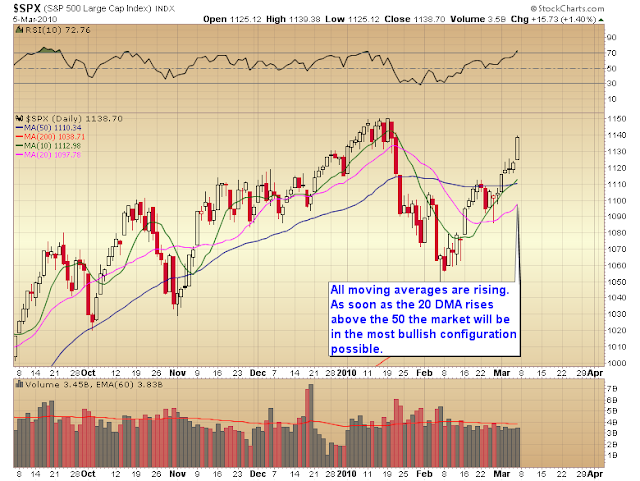 Dollar:
We still have quite the battle going in the dollar. Any positive economic news is acting to drive the dollar higher while at the same time, upside pressure is becoming exhausted and the dollar is trying to move down into a daily cycle low. Eventually I expect the cyclical nature of human emotions to win that battle and the dollar will drop into the now overdue daily cycle low. 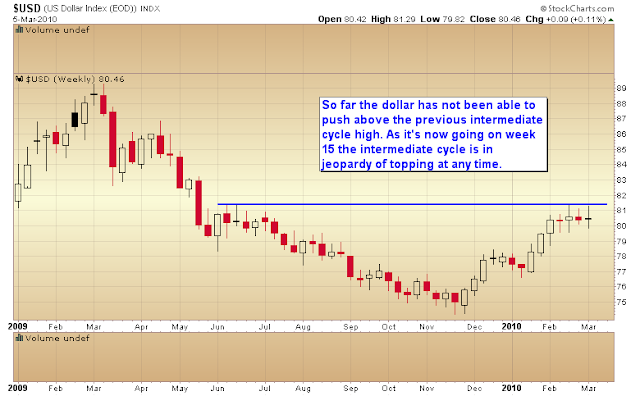 
We already have a left translated yearly cycle in play. 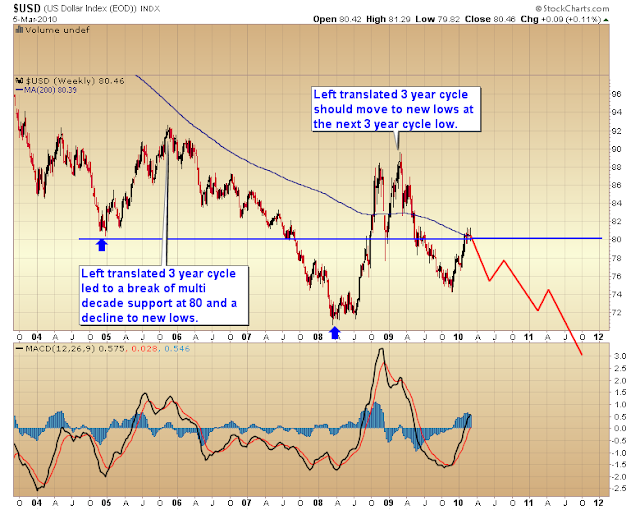 Remember left translated cycles tend to produce the worst declines and usually move below the low of the last cycle. I suspect that major resistance level at 80 is probably going to cap this counter trend move and the dollar is going to start heading generally lower for the next year to year and a half bottoming below 70 sometime in 2011.


Remember the sharpest rallies occur in bear markets. Look at that chart. Does the recent 3 month rally look like a bull market climbing a wall of worry or does it look like one of the most violent bear market rallies we’ve seen yet?

Trust me on this one, it’s not possible to print trillions of dollar out of thin air and maintain a strong currency. This is nothing more than a bear market rally to correct the extreme bearish sentiment that had developed by the end of last year. The dollar remains in a structural long term bear market. Nothing has changed cyclically to suggest otherwise and it’s now at a technical and sentiment level where it’s in danger of the bearish fundamentals taking hold again.

Breadth:
The NYHL chart is still surging higher, so we still have no sign of an impending move down into the mid cycle low from our breadth indicators.

We are getting late enough in the cycle (19 days) that we can probably assume that as soon as the shorter moving average turns down the move into that cycle low will have begun. (We’ll probably see a selling on strength day too.) 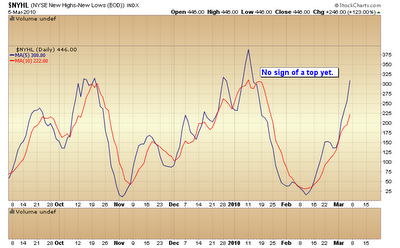 You can see from the NYMO chart that most cycle and mid cycle tops will show some kind of divergence on the McClellan oscillator. Right now breadth is still surging higher with no divergences. If the dollar breaks next week we could see a breadth spike to rival the one out of the March bottom. That could very well set the market up for that explosive (and possibly final) third leg targeting 1250-1450 on the S&P. 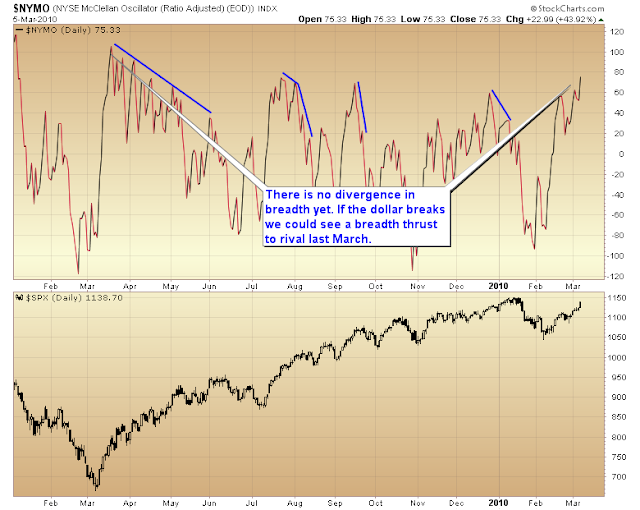 Gold:
It appears gold is forming a small bull flag as it waits for the dollar to break. When it does I suspect we will see gold cut through $1161 and maybe even test the highs. 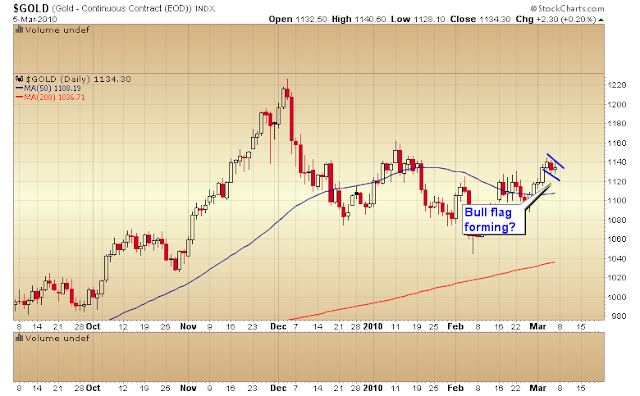 If the HUI can take out the 436 level next week it will accomplish a very important goal as it will turn the point & figure chart bullish again for the first time since December. That will be another very big step in confirming a continuation of the C-wave. 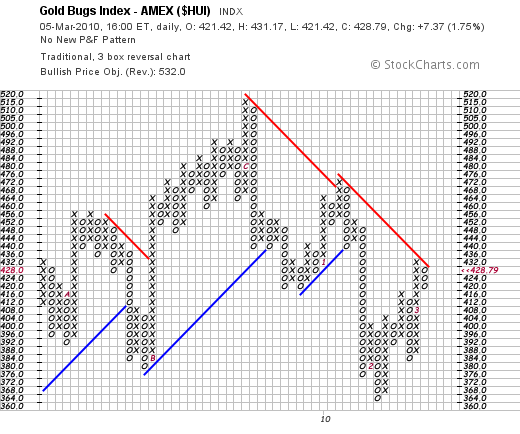 That also means we can probably expect gold to rally for at least two more daily cycles. You can see from the chart that the last intermediate cycle ran extremely long at 6 daily cycles. (5 if you count the October bottom to December bottom as one very long daily cycle.) 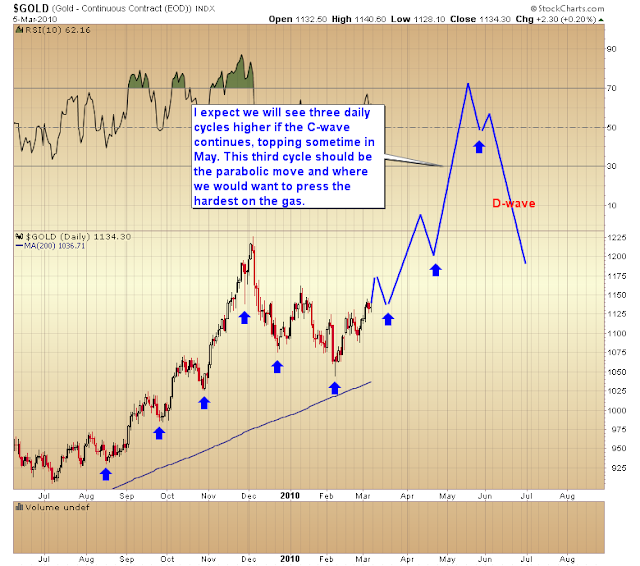 I don’t think that will be the case this time. I expect we will probably see two more daily cycles higher topping sometime in May followed by a D-wave decline into late June or early July.

As you can see from what happened in November a big part of the gains come in the last daily cycle. That’s the point where momentum sweeps gold into a big parabolic spike as everyone starts to catch gold fever. I expect we will see the same thing this time. So I think as the third daily cycle gets started that’s the point where we would want to step on the gas the hardest, probably with a double silver fund as I expect the gold:silver ratio to be spiking down during this period. 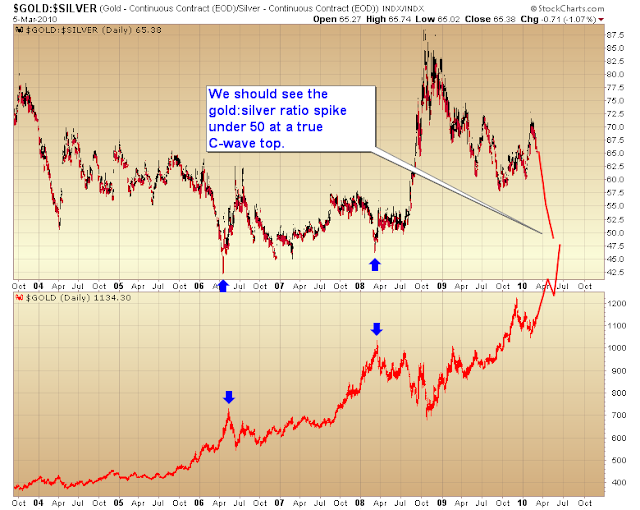 For now though we still need to confirm the C-wave and that won’t happen until gold breaks $1161 and the dollar forms a weekly swing high.

Markets are shaping up:
Folks I like how things are shaping up. We got the correction we were expecting after the second leg of the cyclical bull, the third leg is obviously underway, and all markets are rallying despite a strong dollar. Virtually every asset class is wound tight and ready to explode, all we need is for the intermediate dollar cycle to top and trigger the move. Once that happens I expect we are going to see violent moves higher in everything. I wouldn’t be at all surprised if we see the S&P rally to 1400-1450, oil back over a $100…maybe way over $100, agriculture, base metals surging to new all time highs, and of course the strongest asset of them all, gold exploding higher, maybe even above $1500.

If that happens first off I don’t think anyone is going to be prepared for it. The memory of the bear is still too fresh in everyone’s mind. Bears are going to try to short every overbought level expecting a return of the secular bear market. Bulls will be looking for something more like the slow grind we saw during the `02 to `07 cyclical bull. I just don’t think anyone has any concept of how much liquidity has been thrown at the markets and what that liquidity is going to do to all asset markets.

I also think if this does come to pass no one is going to see the top when it arrives. By that time everyone will have taken the bait, hook, line and sinker that Ben has fixed all the problems. We however, know that on the contrary, Bernanke didn’t fix a damn thing he just created a much much bigger problem.

The structural problems the world now faces are not going to be cured with a printing press. That is only going to make things worse just like it did from `02 to `07.

The cure is for someone somewhere in the world to discover the next “Big Thing”. Something like the personal computer, the internet, the automobile, mass production, electronics, trains, canals, etc. etc. Until that next world changing technology is invented and starts to impact the global economy we are going to be stuck in this secular bear market. A bear that is only being exacerbated by the actions of central banks to fight it. Hell, all the bail out and stimulus money the world is dishing out would be better spent flowing into research. It would certainly speed up the process of finding the next “Big Thing”.

Short term indicators are very overbought. The market should pullback here but if the dollar decides to break the pullback may just be a short consolidation before another surge higher.

This section will remain blank until we get confirmation of the C-wave continuation. I do still have about a 50% position in miners that I didn’t take profits on. I will continue to hold these positions. But new subscribers should just stay in cash at this point as we await confirmation of another leg up or get a signal to buy in preparation for an A-wave advance.

Investing in the financial markets can involve considerable risk. Past performance is not necessarily an indication of future performance. The information included in Gold Scents blog and The GS subscribers daily updates is prepared for educational purposes and is not a solicitation, or an offer to buy or sell any security or use any particular system. Information is based on historical research using data believed to be reliable, but there is no guarantee as to its accuracy. G.D.S L.L.C.,  do not represent themselves as acting in the position of an investment adviser or investment manager for funds that are not under their direct control and fiduciary responsibility. GDS L.L.C.,  will not provide you with personally tailored advice concerning the nature, potential, value or suitability of any particular security, portfolio or securities, transaction, investment strategy or other matter. From time to time, GDS L.L.C.,  may hold positions in securities mentioned, but are under no obligation to hold such position
Posted by Toby Connor at 7:37 PM